I liked a photo I saw of the Swordfish ship from the Dreadflleet War Hammer Game and have chosen this for my Fantasy Building Project. 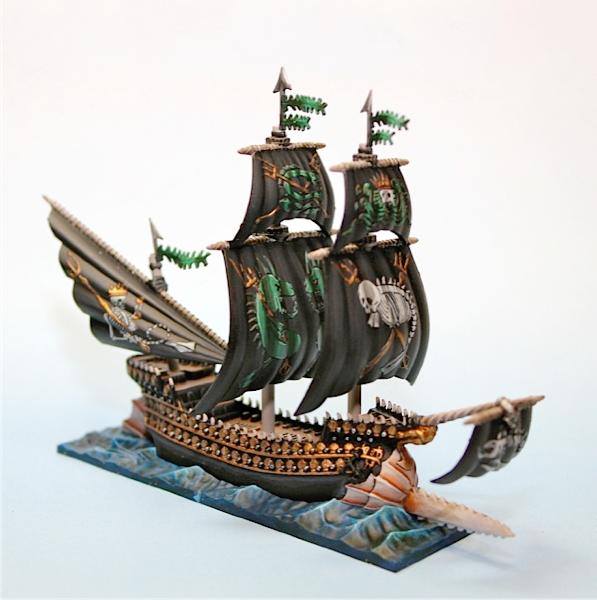 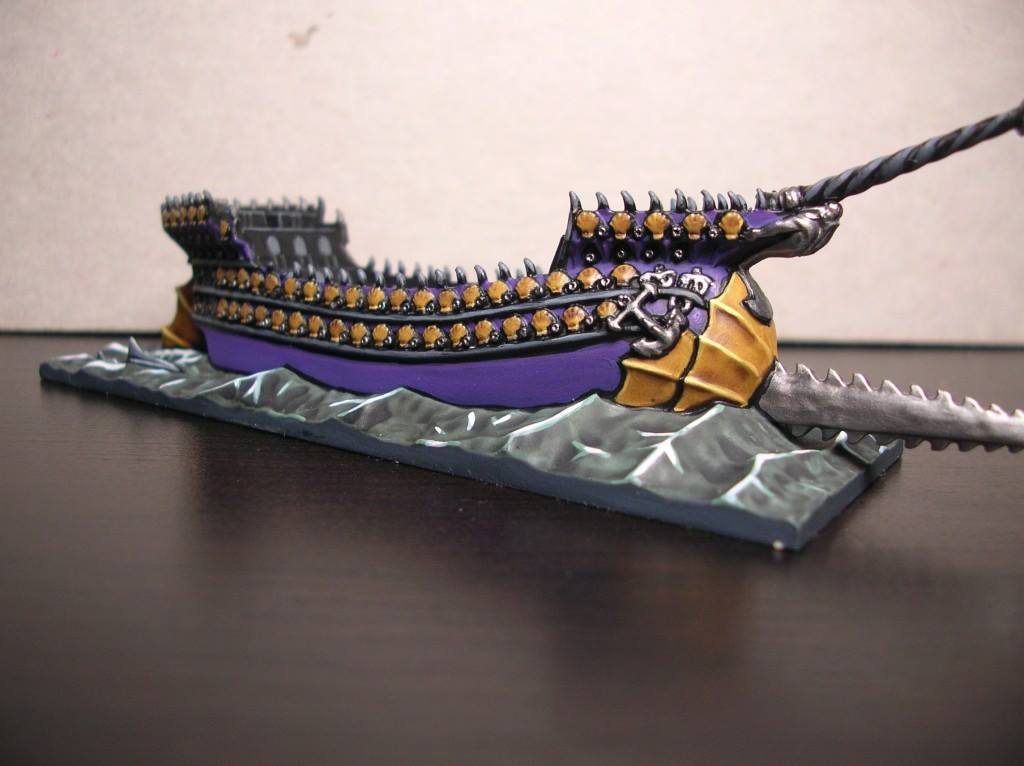 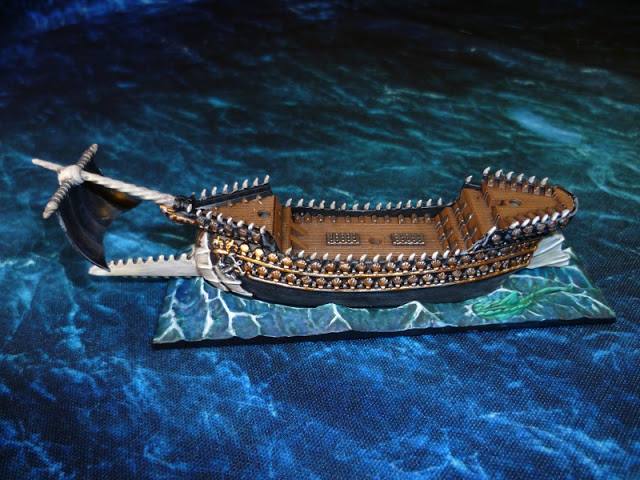 I bought some Dread Fleet Game parts on Ebay. I went through my bottle stash and found a bottle that will fit the hull of the swordfysh. I filed the sides of the hull sea stand so that it would fit in the bottle. I put the main mast in and found it would fit if I put the ship at the back of the bottle but then I realized that the sail extends off the stern so I may have to shorten the mast . I plan to use the hull, sea stand, sea figures and the round disk at the end of the cork. I'll have to figure out how to mate the fabricated masts, sails, and rigging to the plastic hull and still get it in the bottle. If need be I'll make the hull or make a deck that will fit inside the plastic hull. 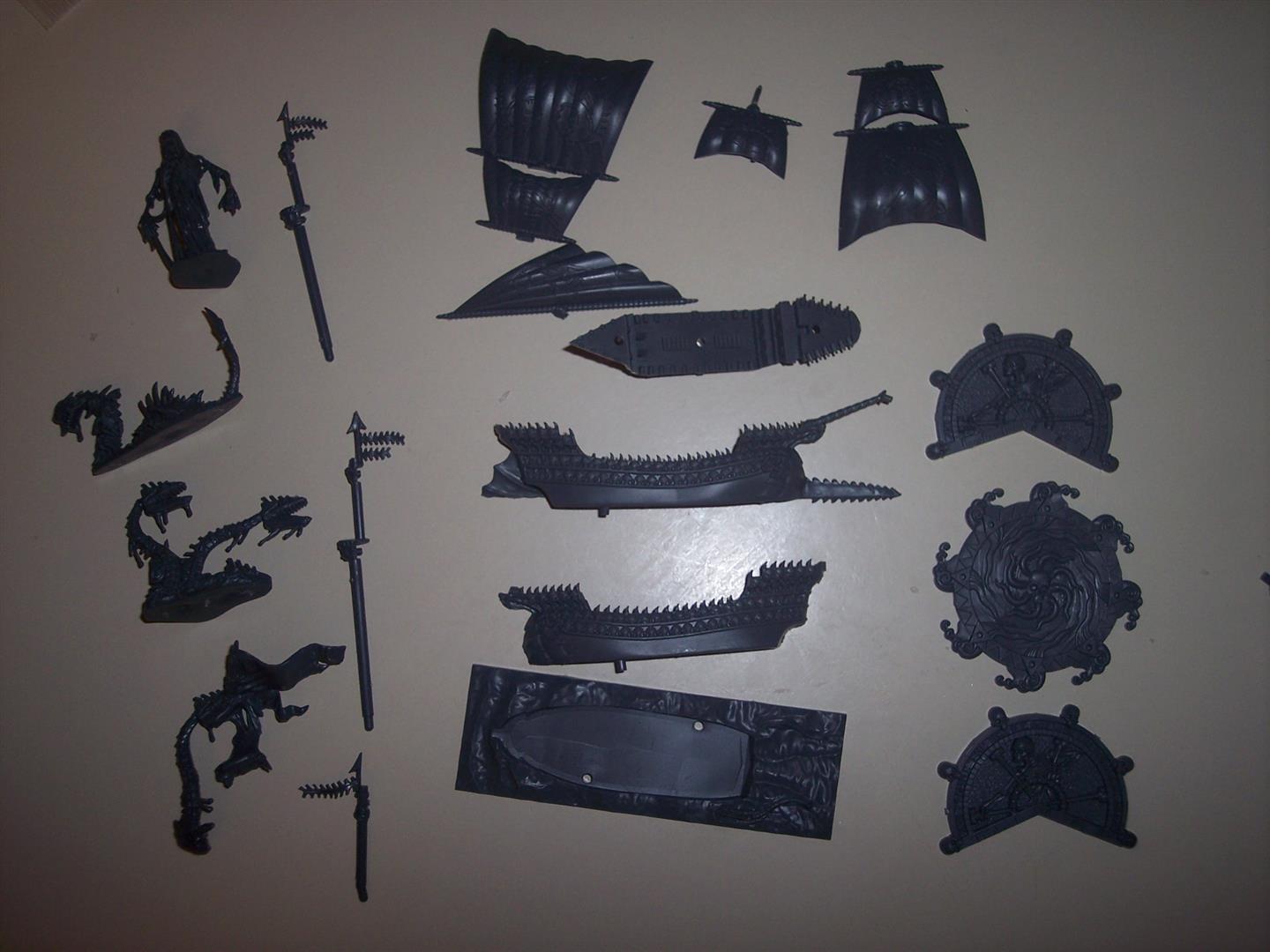 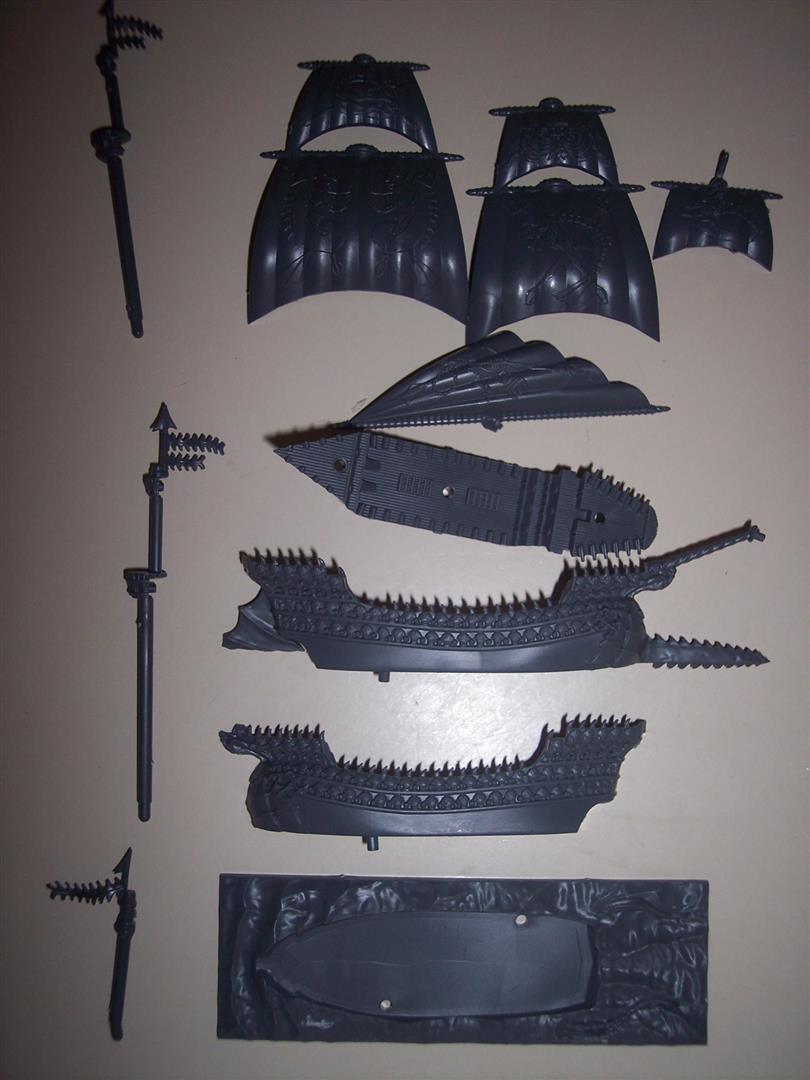 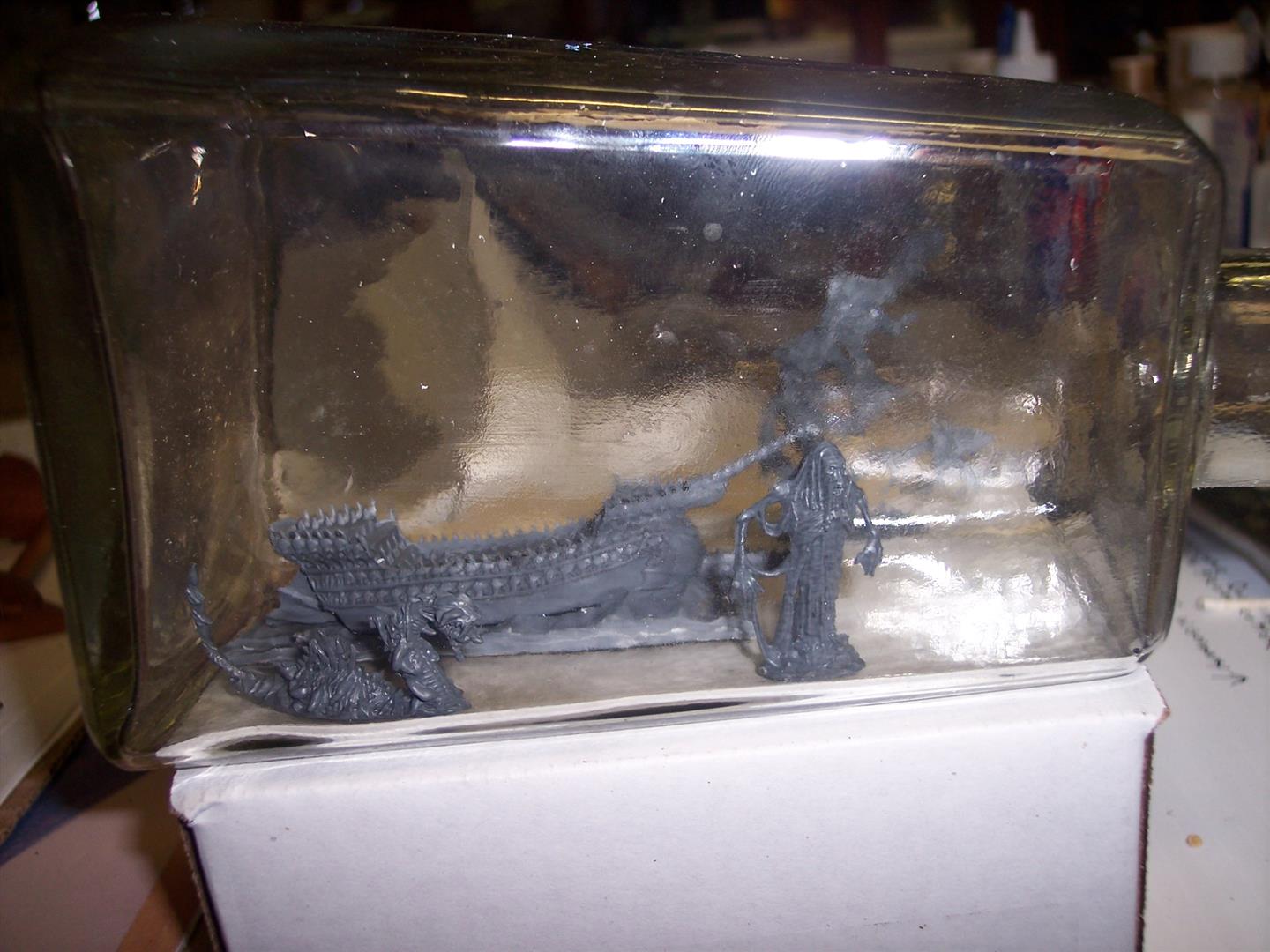 I made a Hinkley Hinge for the main mast by cutting a slot with the diamond wheel and then using the flat side of the wheel to sand off the other end till it fit into the slot I cut on the other end. I made sure to cut the slot near the top of the wheel so one side of the slot is higher than the other. After sanding the other end I cut the end at the same angle as the slot. This way when you raise the mast once it gets to the vertical it can't go the other way. The aft mast I sanded the tip that goes into the deck and drilled a hole into the end to attach a thread, The mast will then be pulled into the hole in the deck. I plan to use the top of the plastic main mast. 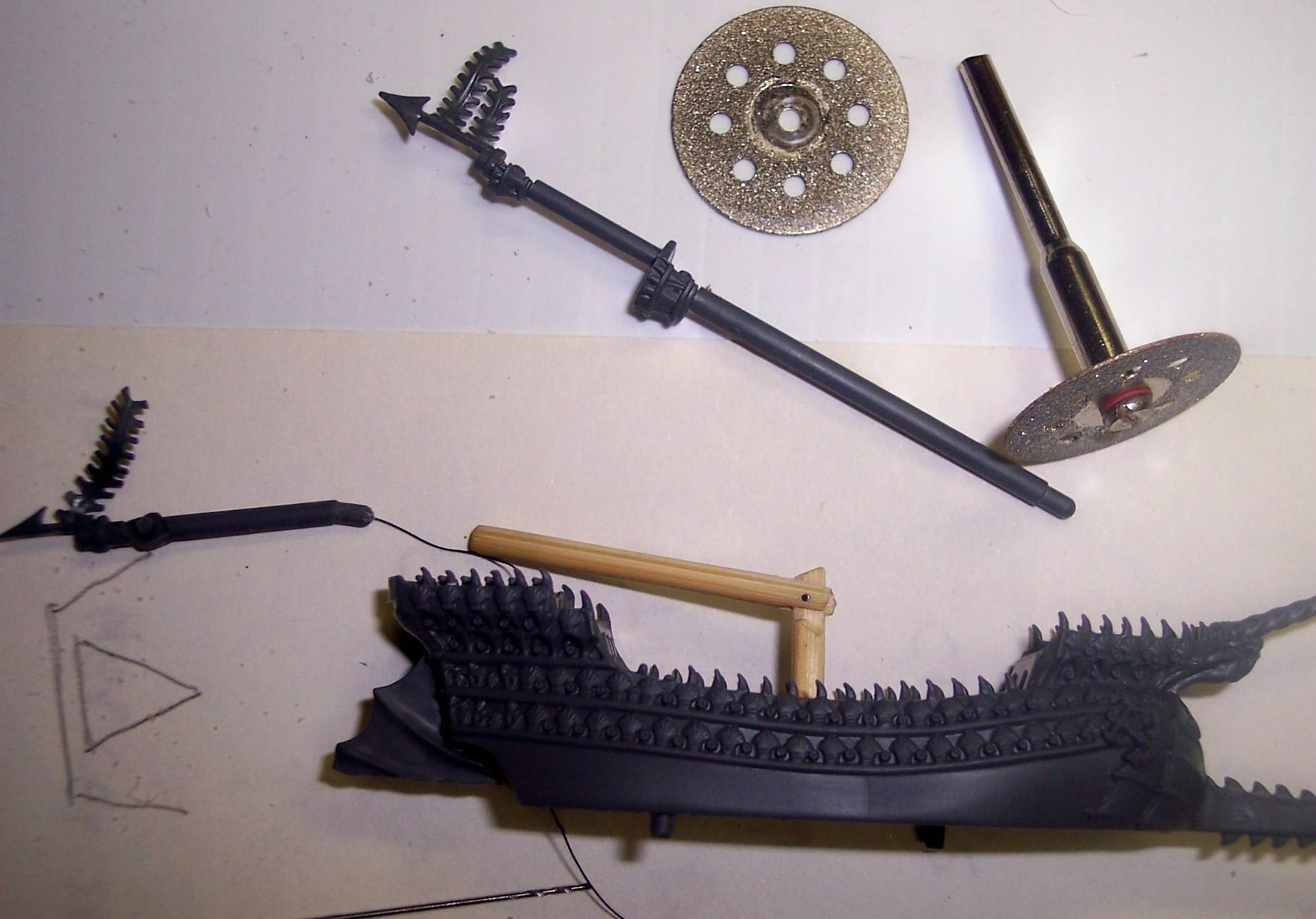 Here are pictures of my progress. As you can see it's mostly just painting so far. The rear mast will go in first and them pulled into the deck hole once in the bottle so I probably will not have rigging lines for it. Right now when I fold it down it will not fit into the bottle. I'm going to cut the rudder off the ship and glue it to the base which gives me a bit of room at the aft section.I tried painting the larger lower sails and then taking a picture so I could cut them out but the color and painted design isn't clear enough. I might try painting paper. 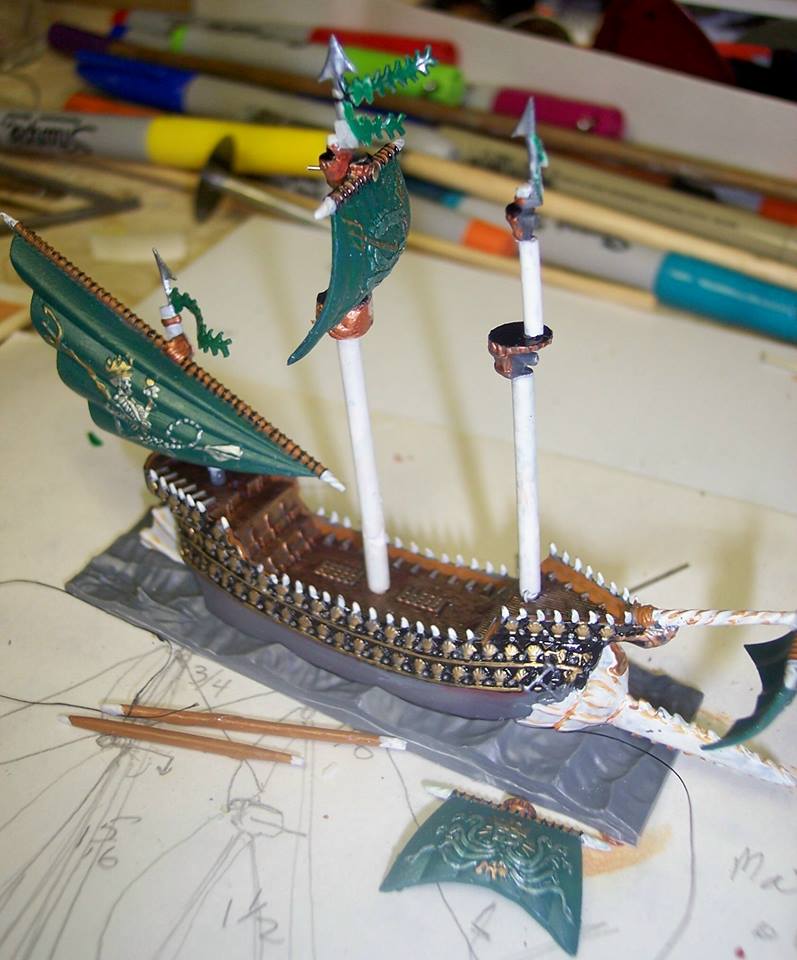 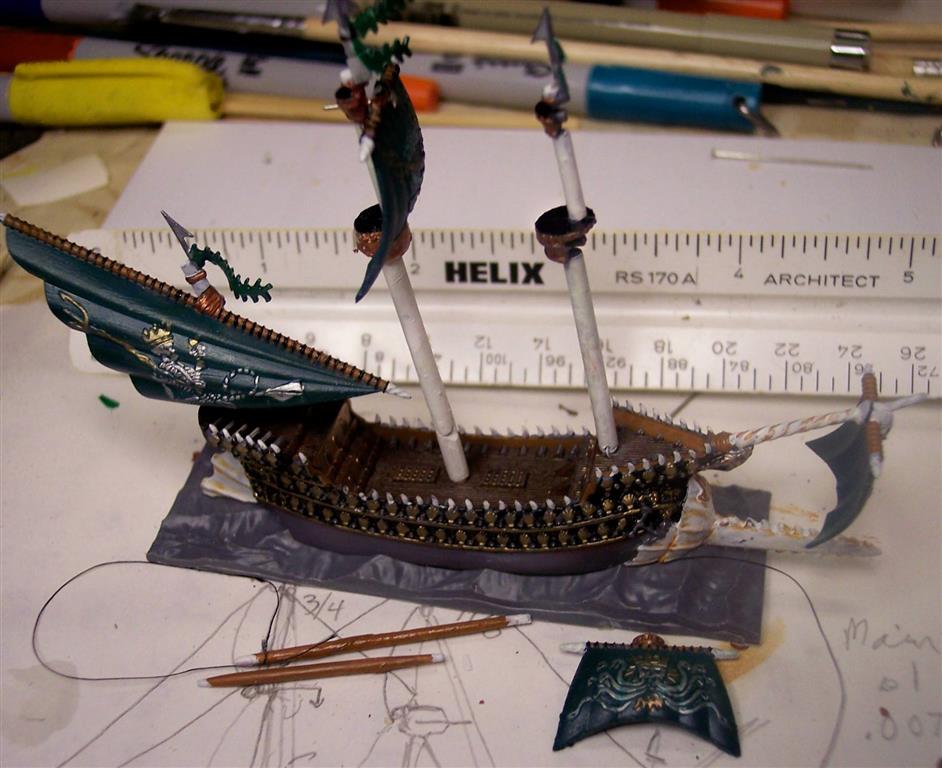 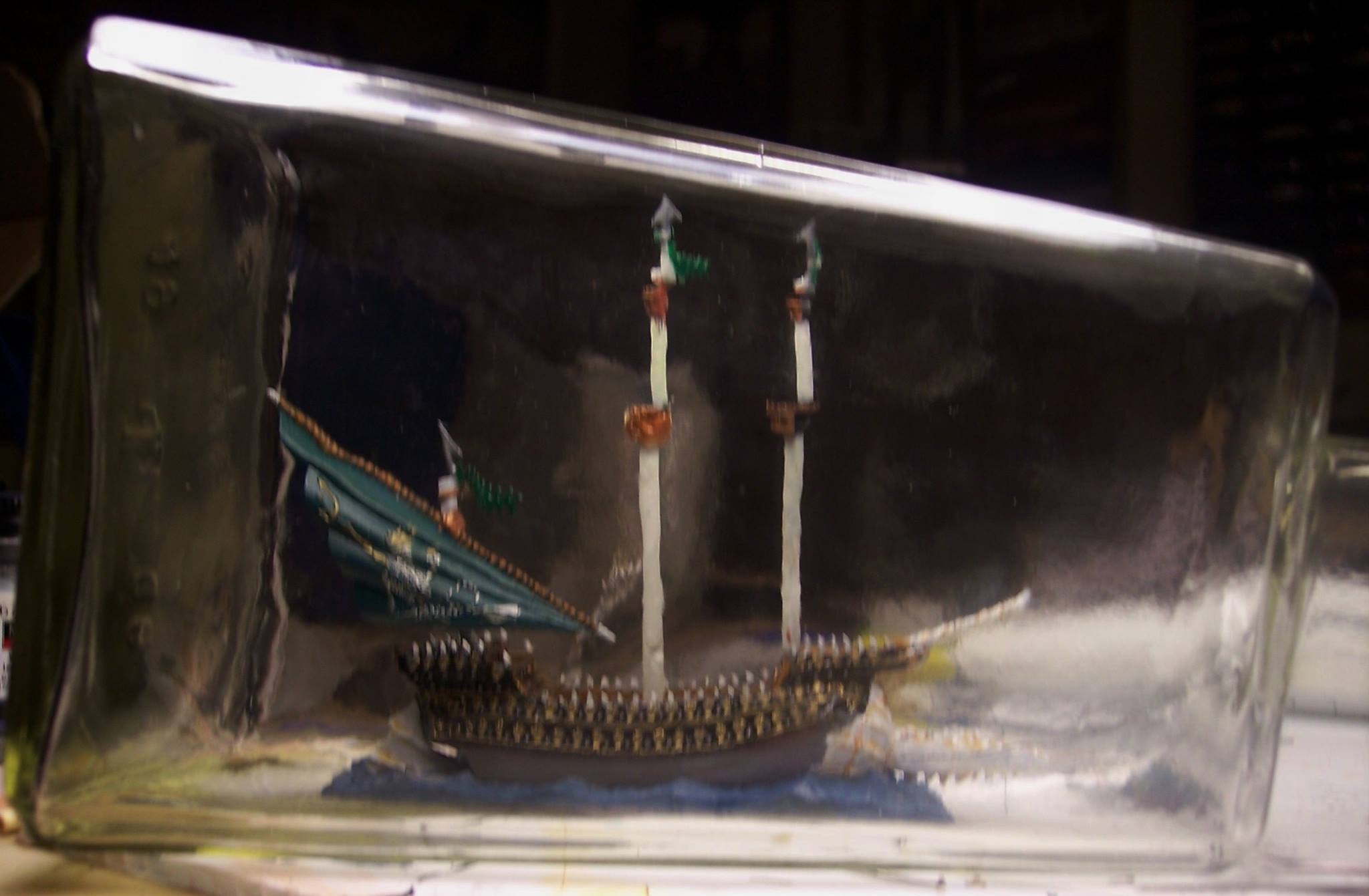 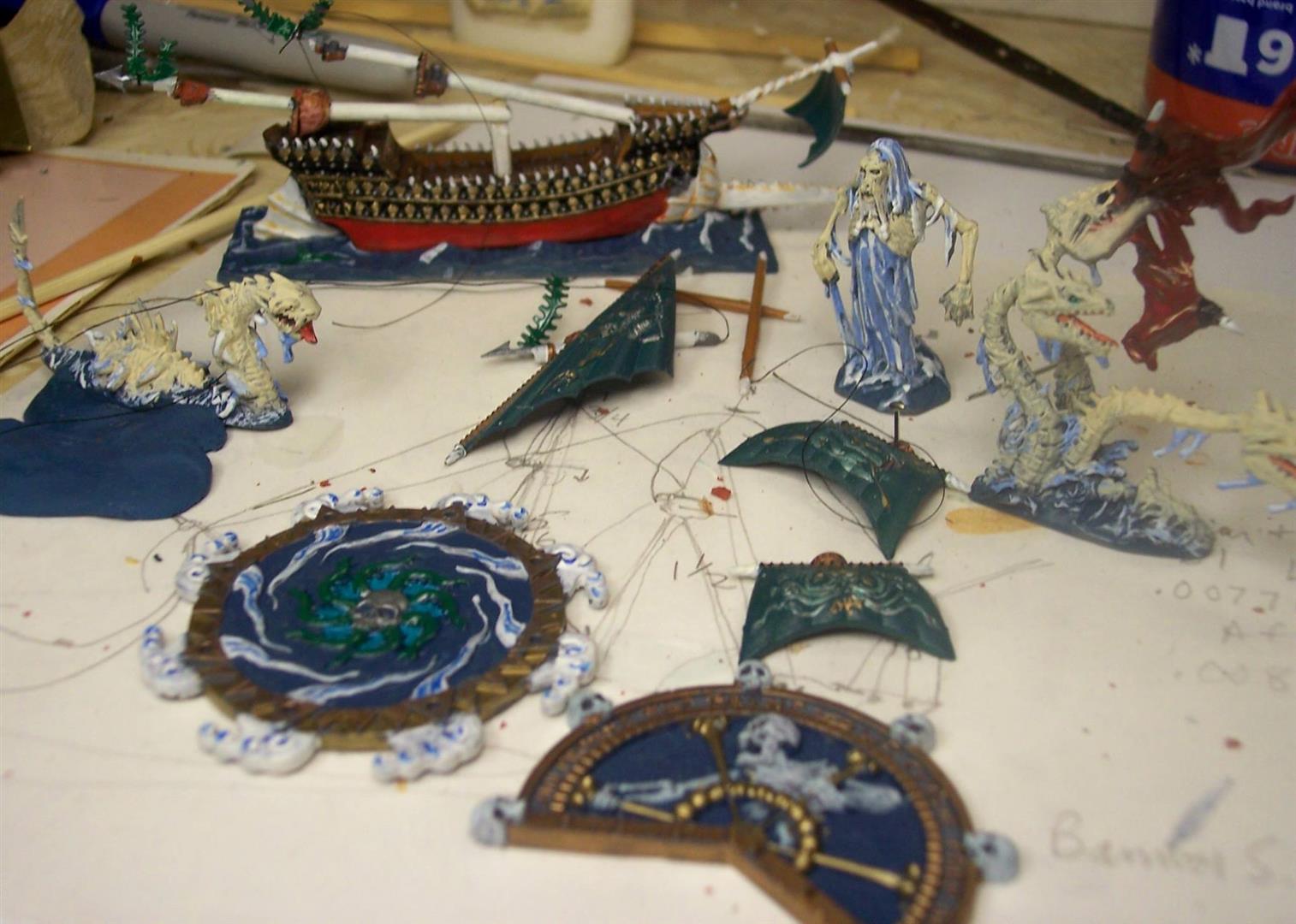 My attempt at trying to duplicate the plastic sails with paper. I laid the paper on the sail and cut out the shape. I painted one side and let it dry on a curved surface to get the shape. I took a picture of the plastic sail and cut out the monster and painted them with a silver magic marker. The monster twins I went over with a green marker. I then glued them to the painted sails. The spears I added with a gold marker. I then painted the other side and let them dry sitting in the plastic sails to help keep the curved shape. 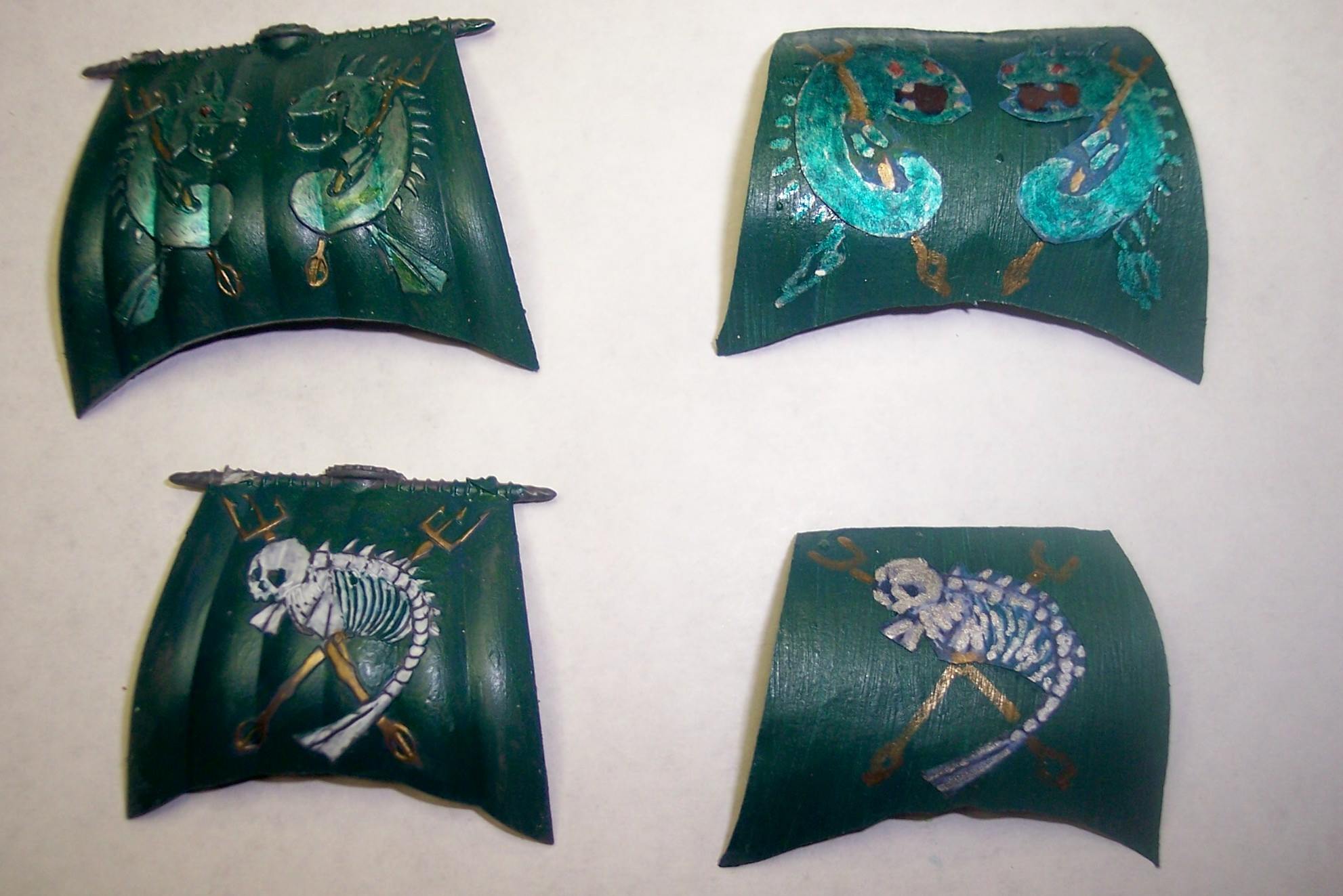 I also added sail sewing lines like the plastic.

I keep having problems getting it to fit in the bottle. I cut the rudder off the hull and glued it to the plastic sea which helped.. I used a standard hinge on the foremast but I had to scrap that also so I will put it in separate like the aft mast. As a result, rigging ideas are constantly changing and has a long way to go. 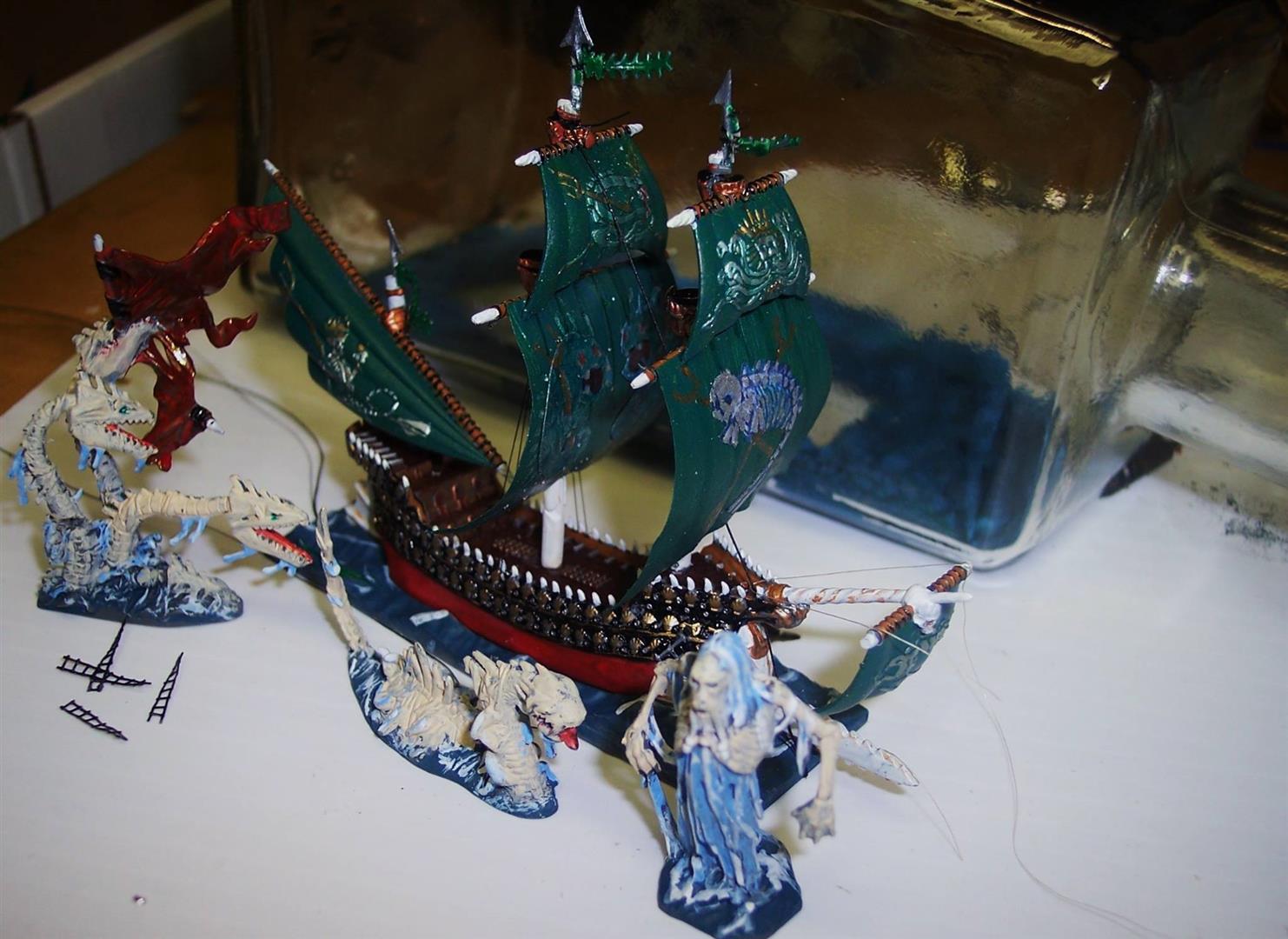 It's been a while since I last posted on this because I've been busy working on other projects. This picture shows how I rigged it. The rear mast will go in the bottle first by itself. It has 2 lines, 1 that pulls the mast into the hole in the deck, the other is tied to the end of the boom and goes into the deck in front of the main mast to line it up. The main mast folds back the conventional way with 1 line that passes through the front mast and into the deck near the bowstrip to pull it up. The front mast folds foward because it would not fit the regular way. It has 3 lines. One line that pulls it into the hole in the deck, 1 line going to the rear and into the deck and 1 going forward and tied to the bowsprit. 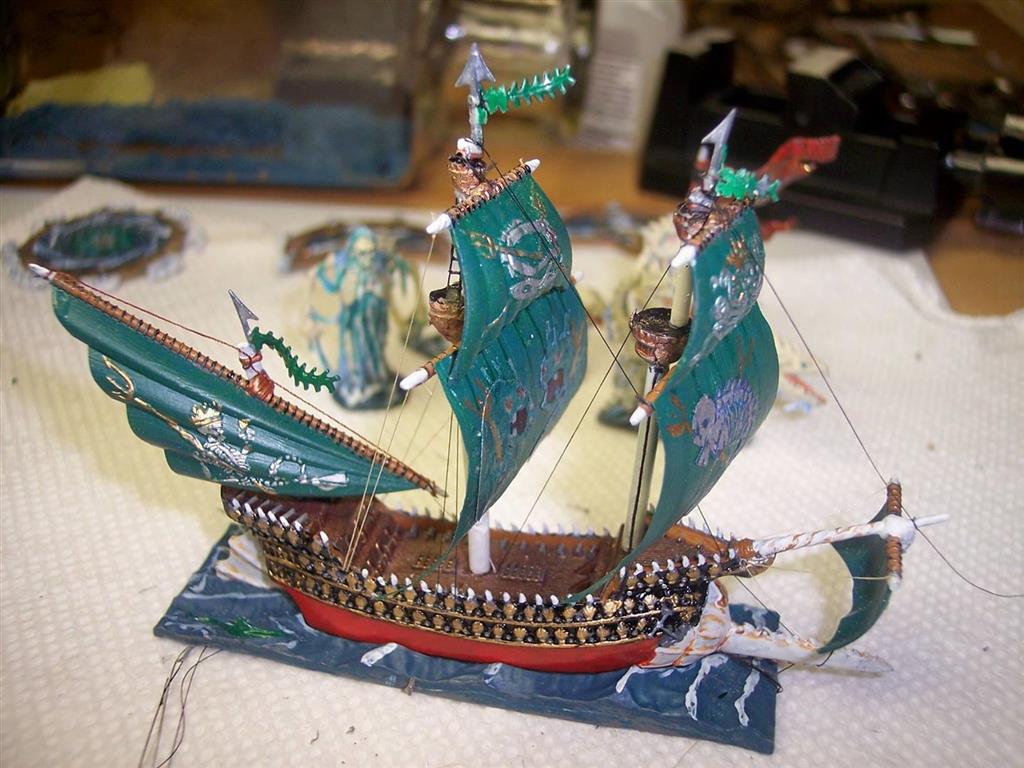 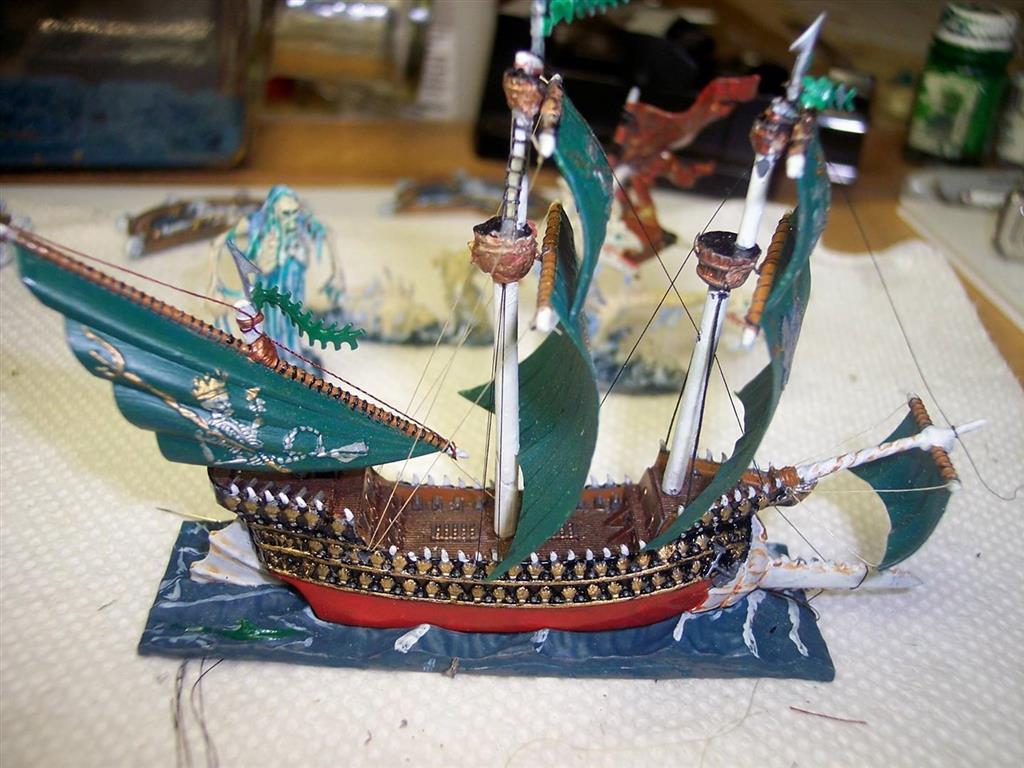 Lines going out of the bottle. 3W and 5W on the port side go into the hull at one point and go out. All lines except 1 and 2 will exit the ship at the base of the bow. Line 1 does not pass through the bowsprit. I t will be tied to it. 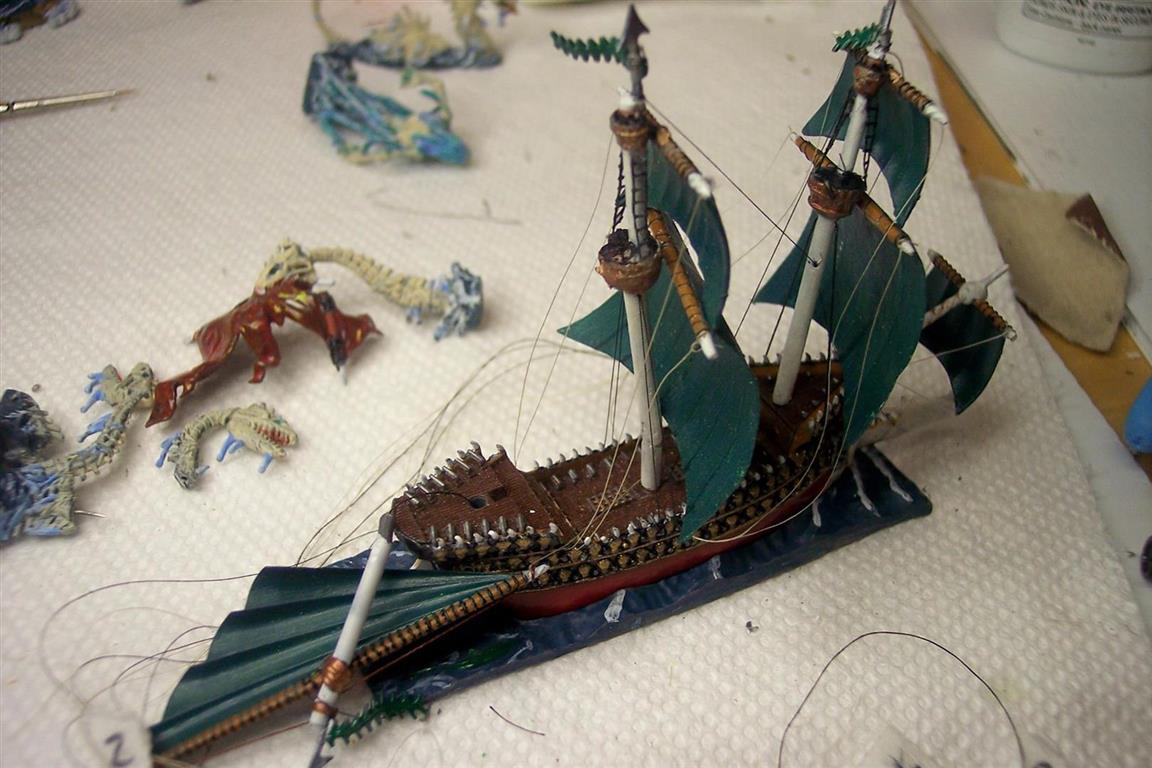 This shot clearly shows the spar lines. This ship is very similar to the Mayflower and the Golden Hind. Ideally I should add 8 more white lines to the lower corners of the sails but I know I will have problems with clearing the lines as it is so I am not going to do it.. 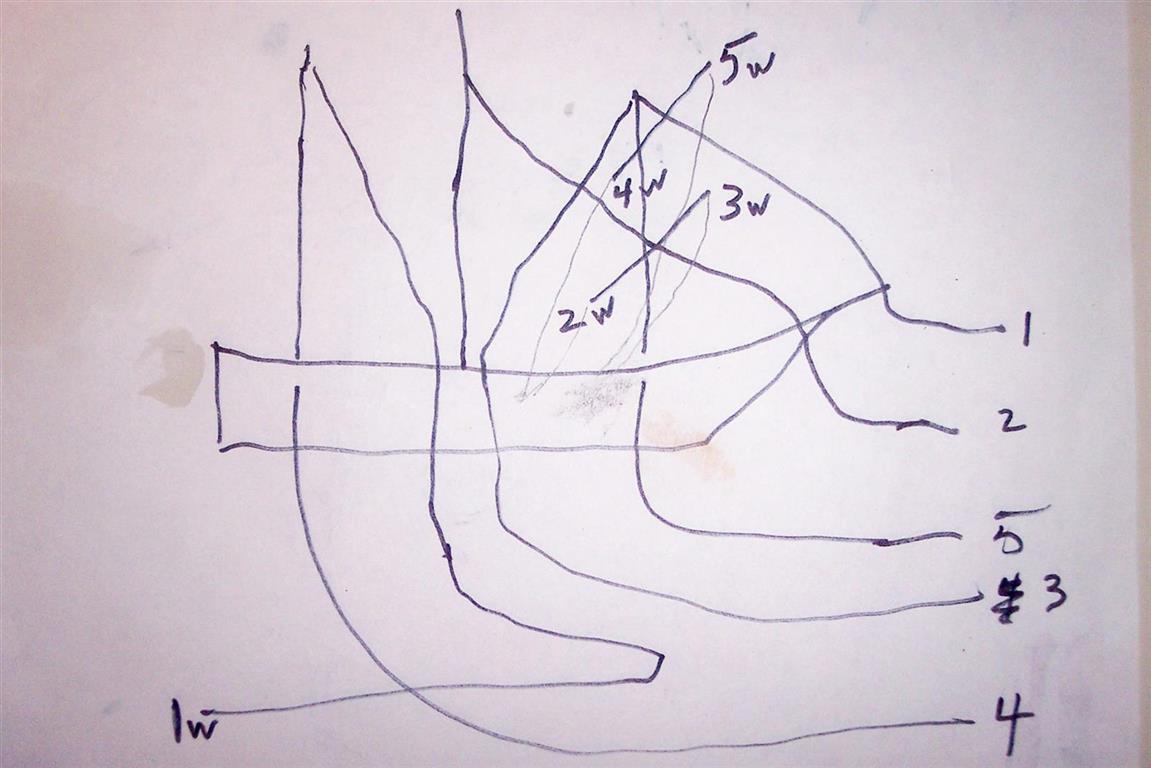 Finished the rigging. I have 10 lines coming out of the bottle, 5 black and 5 white. For the front mast I have 4 white lines coming out to line up the spars. Normally I would run a spar line through the hull to attach to each side of the spar like I did for the main mast but because the front mast will come out and lay forward that was not possible.

The plastic base installed in the bottle surrounded by clay. 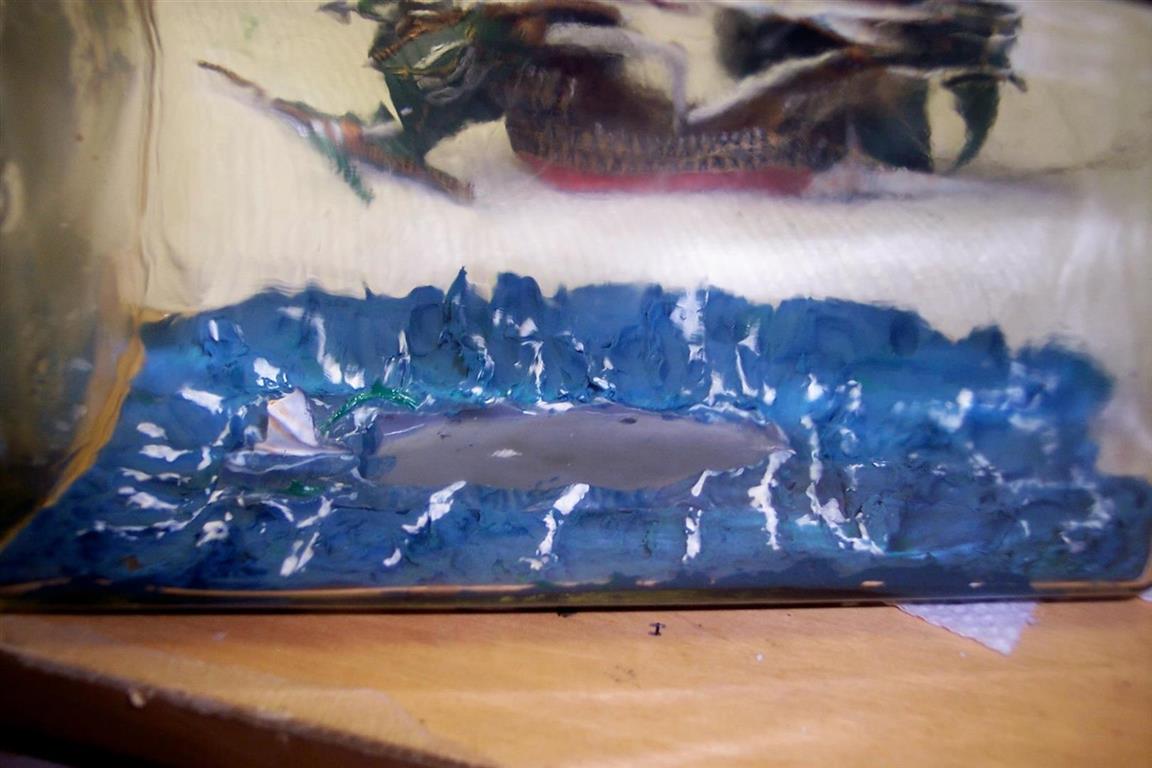 How it looks inside.

Rear Mast put in its hole and Main mast almost up. 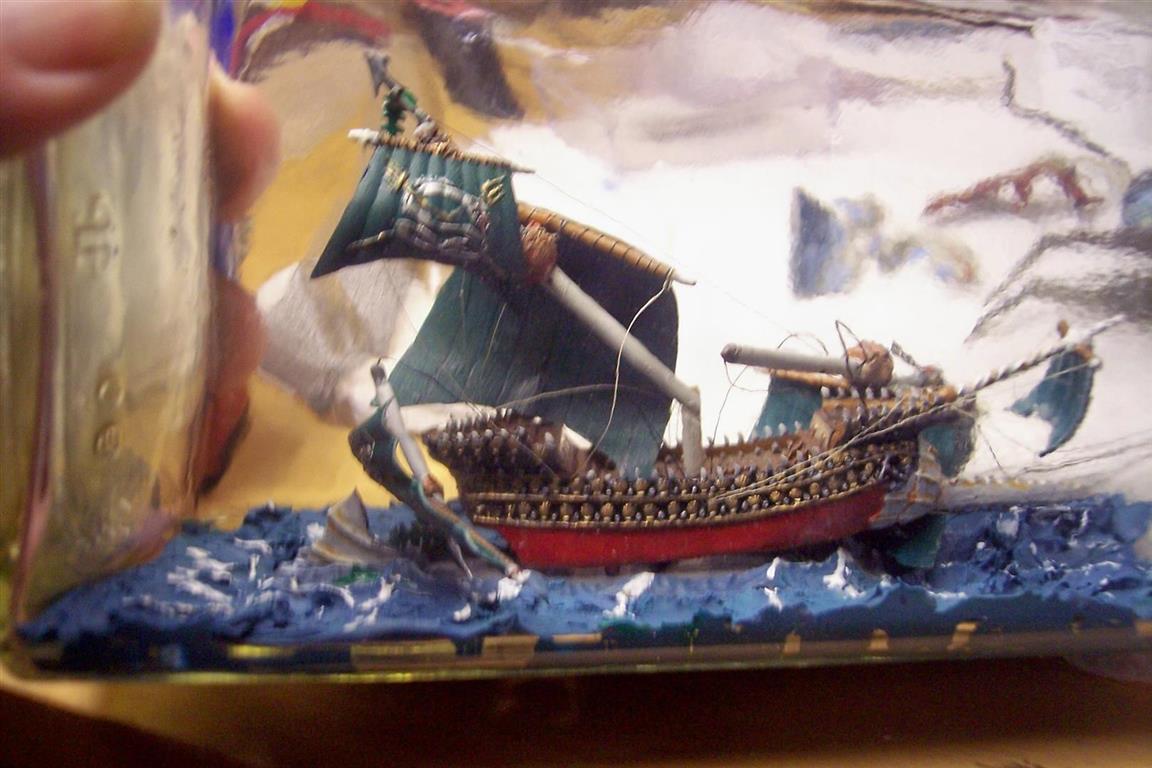 Main mast up and sails aligned. 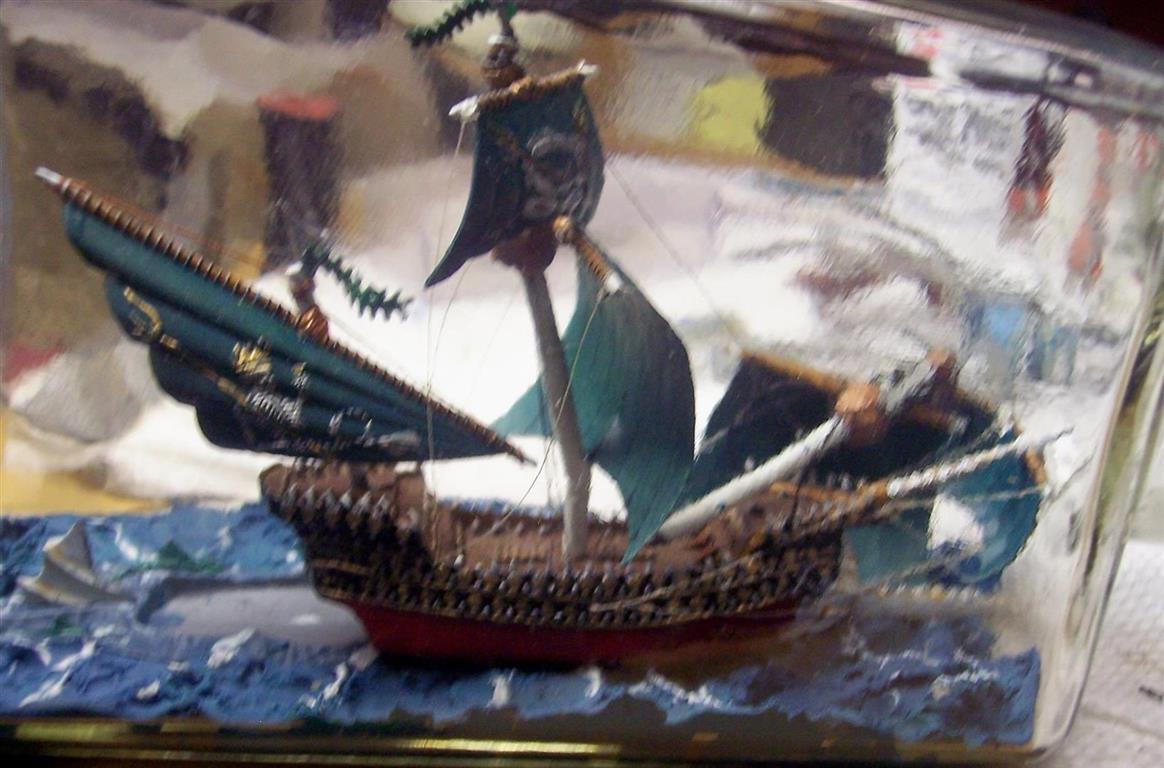 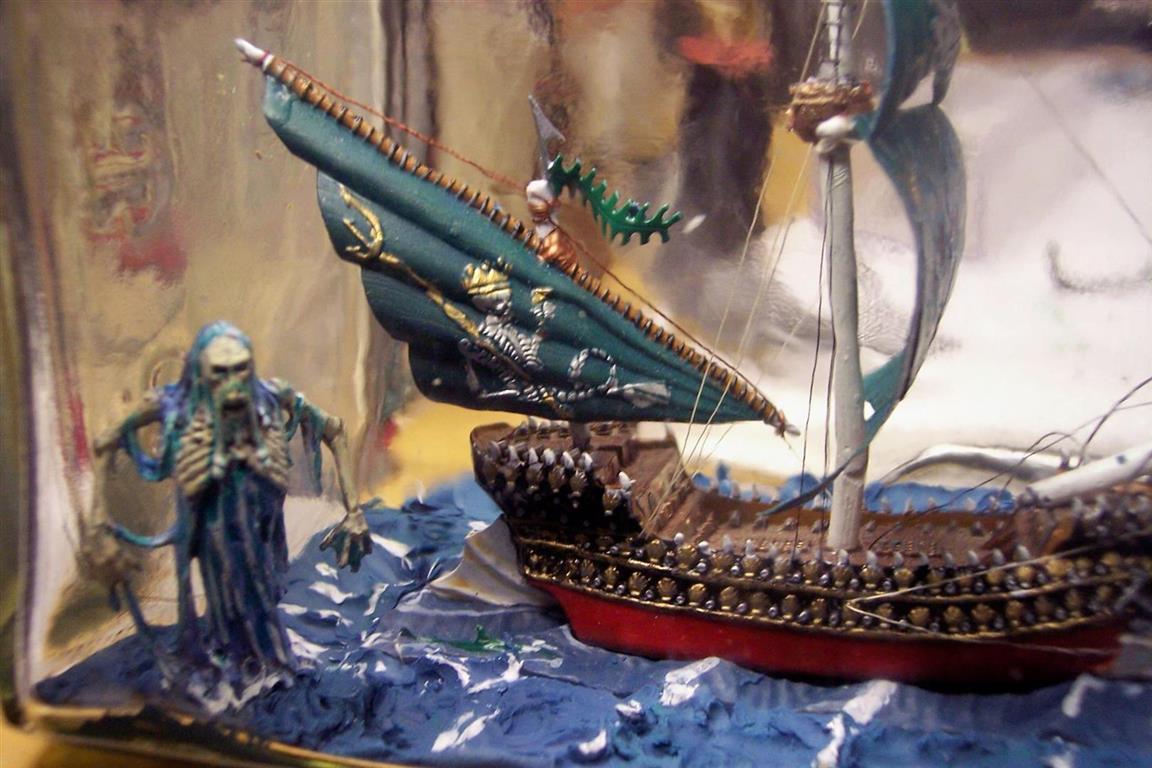 The Swordfysh going in

I pulled the foremast back until it lined up with the main. Originally it was more forward but I like it this way. 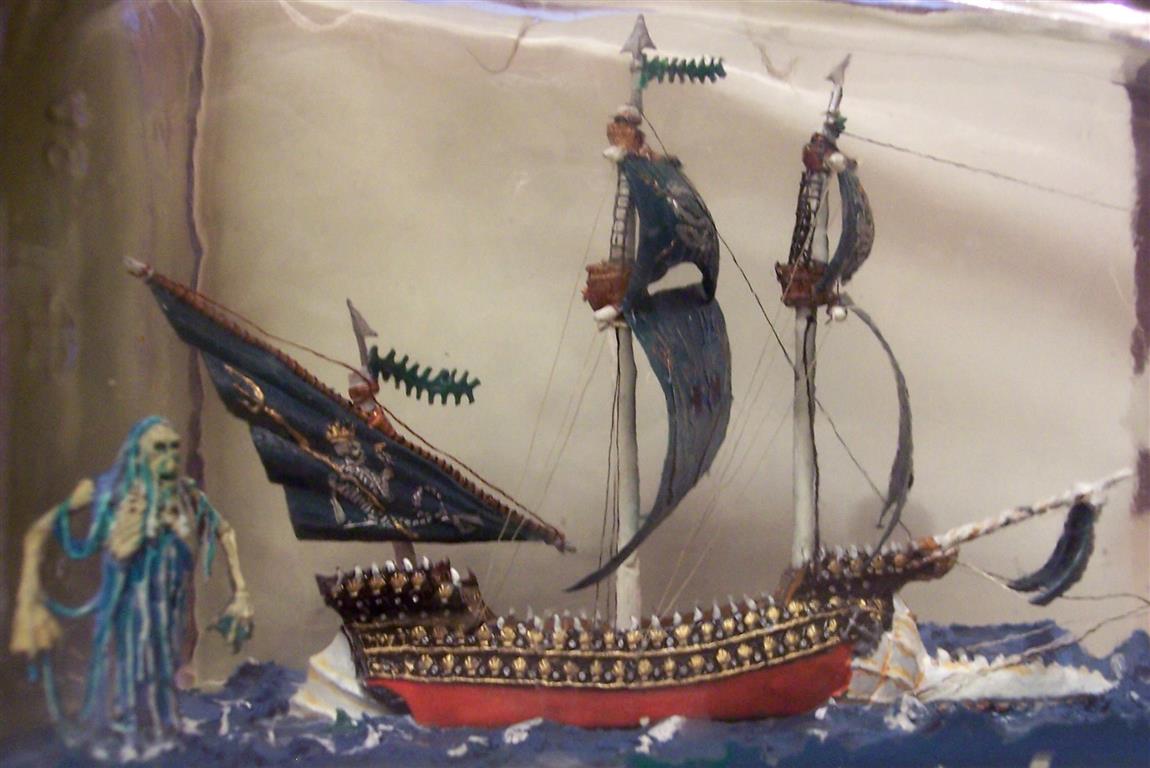 My lower sail is not lined up on center with the mast. Too late to do anything with it now. 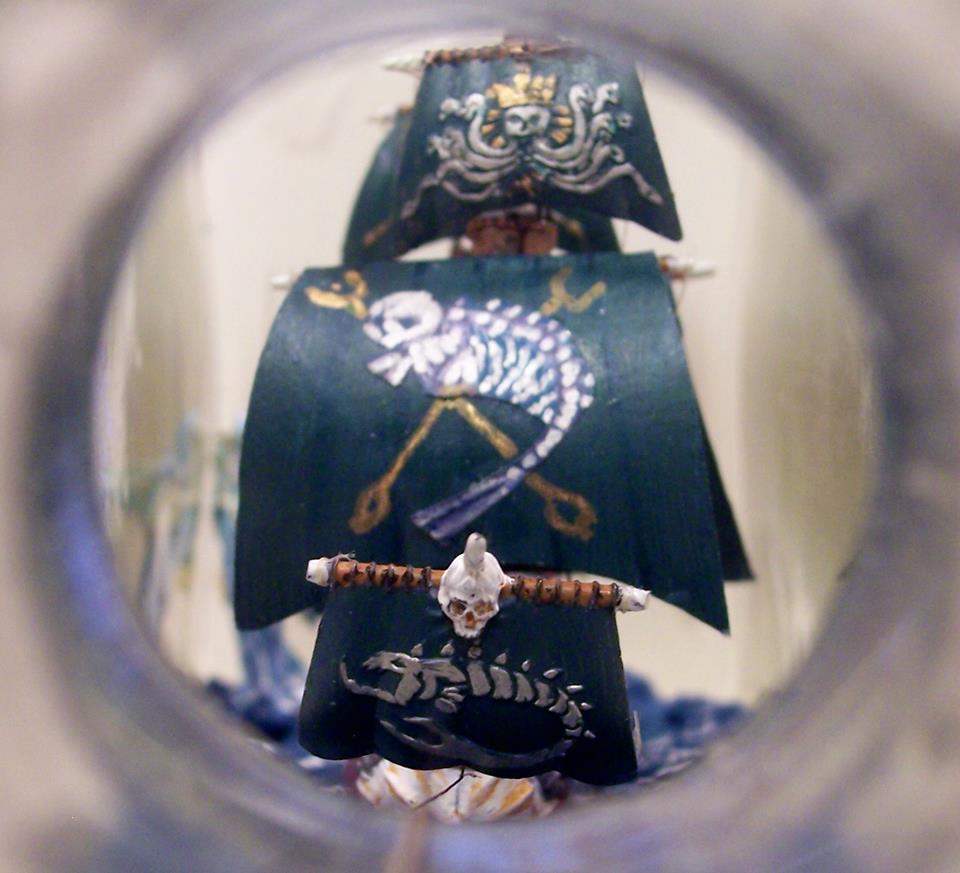 Port and starboard views. I still have to add 2 sea monsters, glue lines in position, tie off the foremast line to the bowstrip, and cut the lines. I might add some more white foam near the hull. 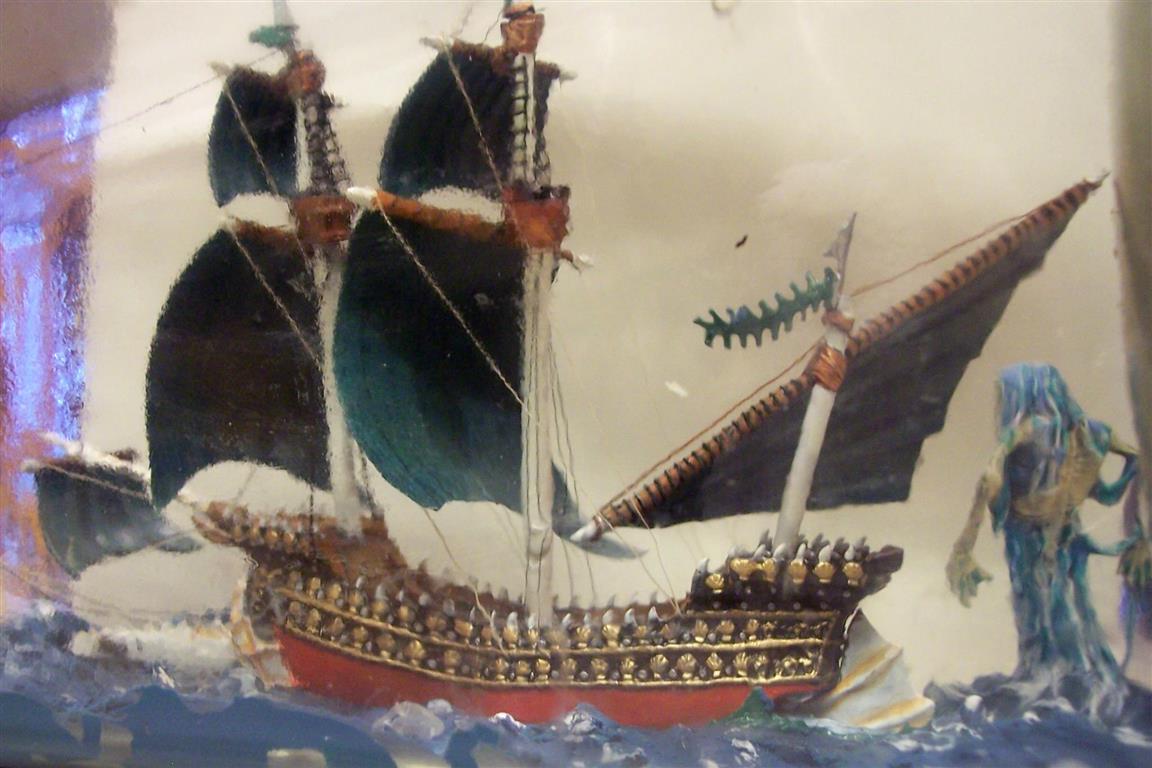 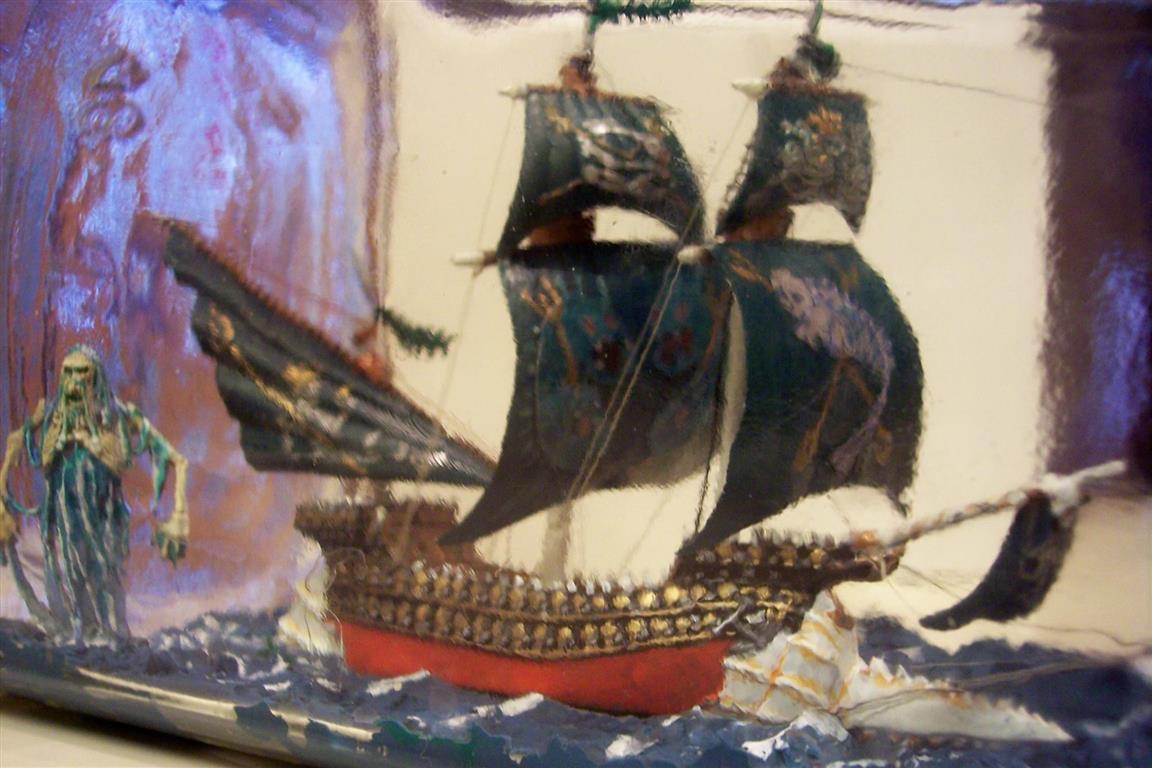 While I was putting in the last head with the sail in its mouth, I pushed the bowstrip and broke it. Since the bowstrip sail was tied to the ship, along with the mast line, it was easily glued back. Thin plastic is a problem as far as strength. I also noticed that the top of the masts are slightly bent from the pull of the rigging lines. 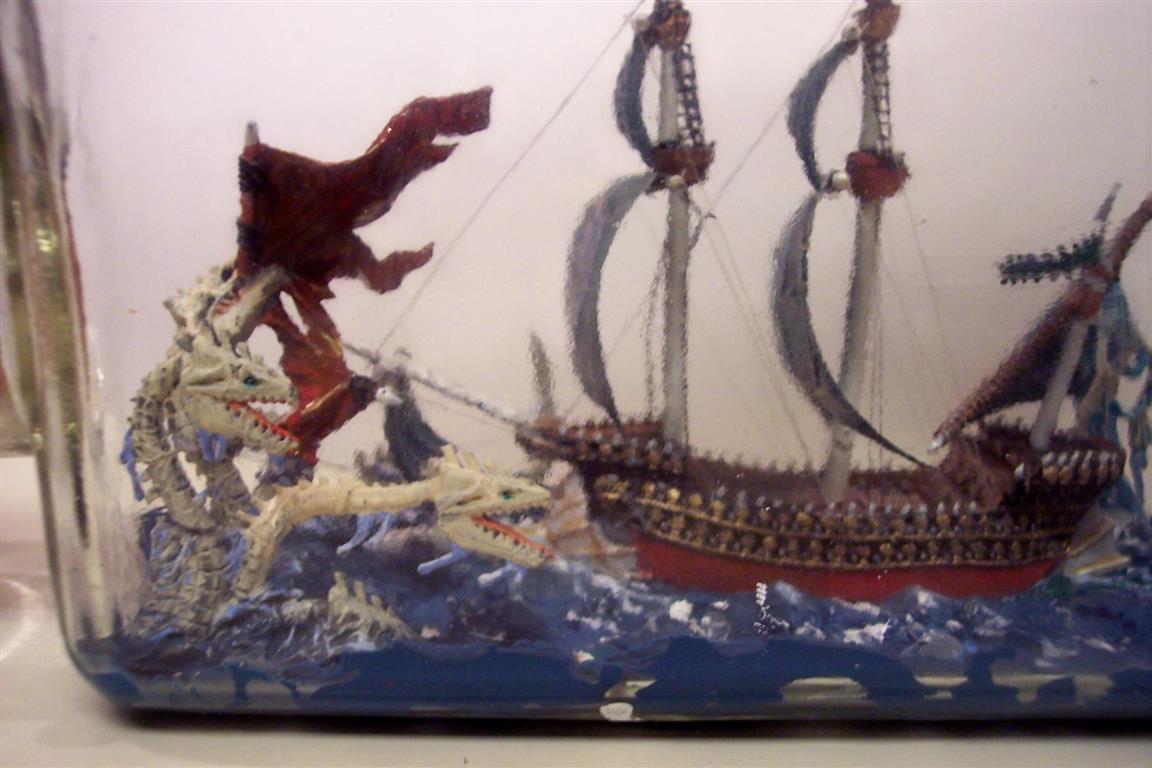 After much cursing I finally got the foremast up. The lines were tangled. When I tried to raise it the line going from the center of the mast back into the deck in front of the main mast broke off at the mast and came out. I also lost a line that went from the end of the spar on the aft mast but I only needed that to help me get it into position. Luckily the 4 lines to the spars on the fore mast help to hold it in position. Right now the fore mast is angled too far forward so I'll pull it back a bit. 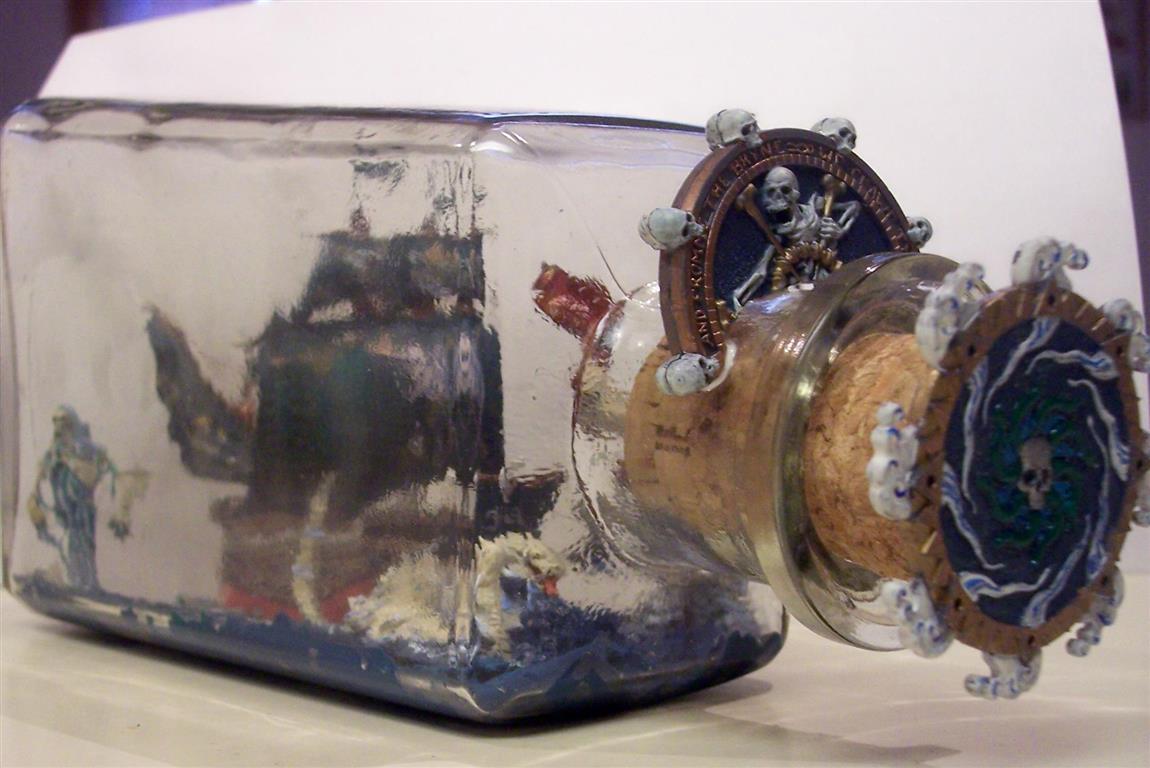 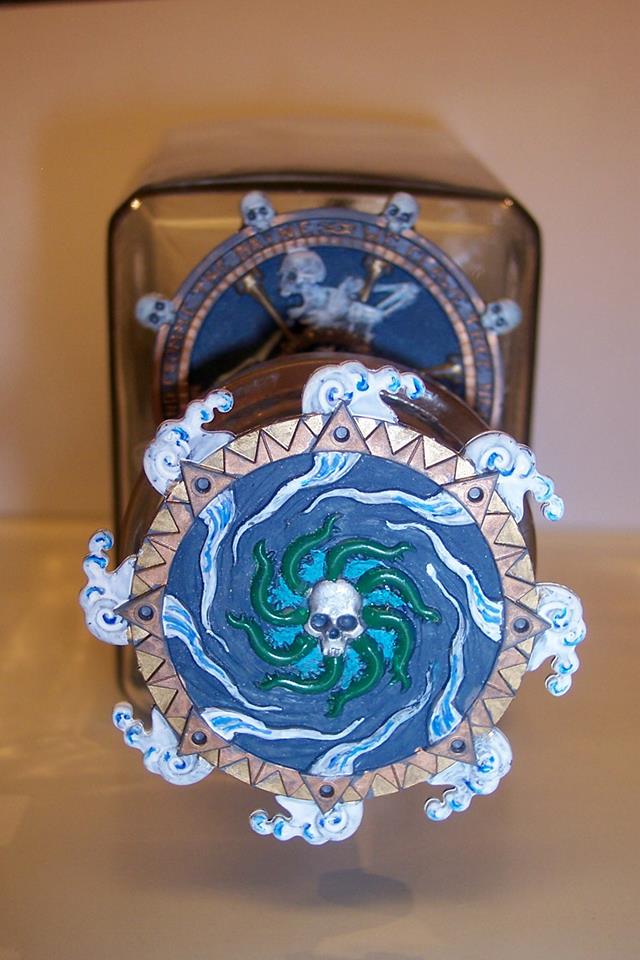 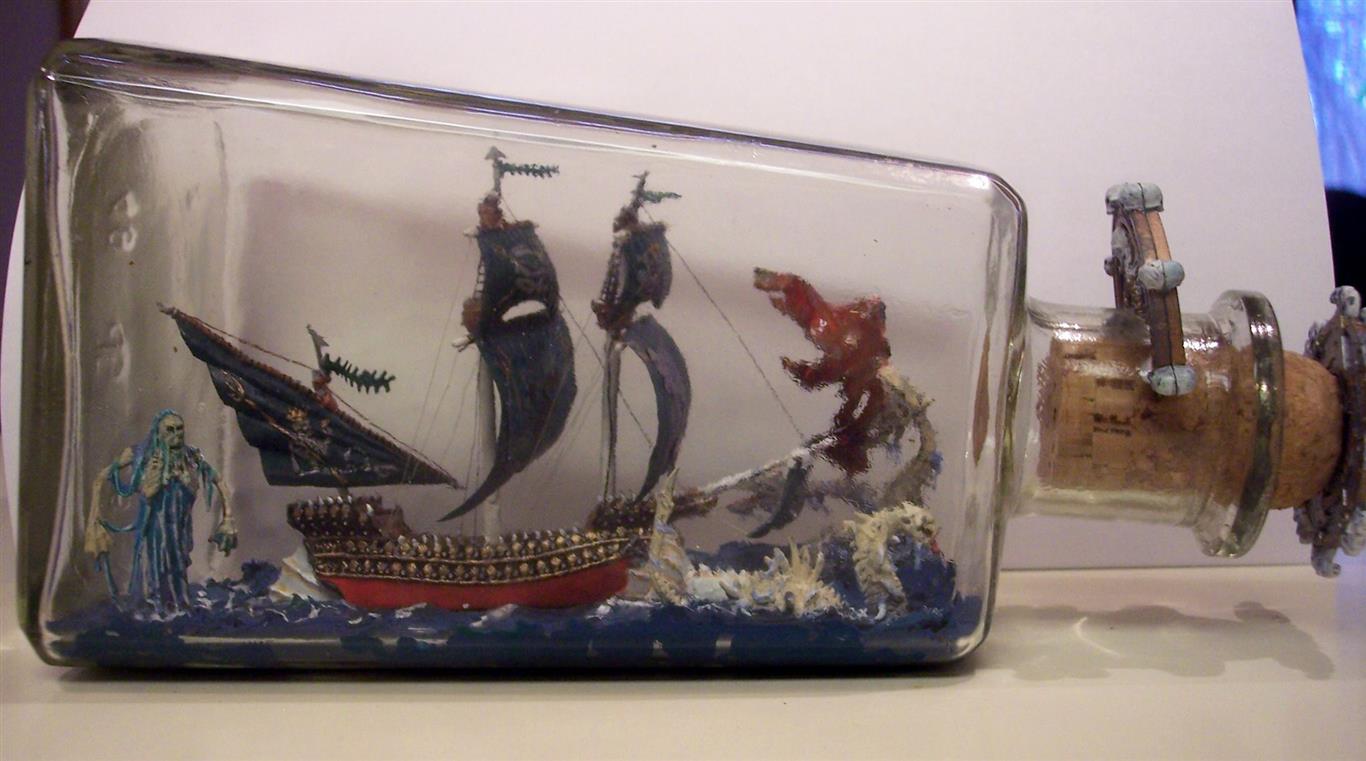