Since so much of my work is in miniature, I often have the need for a large amount of blocks on a scale 1:500 – 1:600 to use in the rigging of my sailing vessels. To prepare a working copy of a block on this scale might be compared to making shoes for fleas; technically difficult, but even harder taking into account the total quantity of blocks aboard the ship. Therefore this article deals with the process of manufacturing a block. After practice and with skill development you will be able to equip your model’s rigging with blocks in sizes from 0.5 mm without making you feel like yelling at the family, or throwing things at the television set.

First, about the essence of the object in question; blocks consist of the wooden or metallic cheeks which form the housing of the block. Between the cheeks are one or more pulleys, prepared from lignum vitae or copper, pulleys are twirled on the metallic axis, called a pin. So that the lignum vitae pulleys would not grind on the pin, in the middle of pulley they inserted copper bushings, and in the middle of bushing’s slot a lubricant was used. One or two slots types were selected and these slots were called piles. The cheeks of block consisted of lateral boards, average board and inserts. These parts were fastened between themselves by through rivets on the copper washers.

a)  the part of the block: housing (cheeks), pin, pully;  b)  single-pully block;  c) "dvushkivnyy" block with two piles for the sling;  r)  three-pully block with rwo piles for the sling;  A)  guiding guy - eye with the chute for "benzelya."
In the Russian fleet, "tolstokhodnye" blocks were usually made and "tonkokhodnye" blocks were specially made. The “Tolstokhodnye” blocks had thicker cheeks and pulleys to handle the large amount of stress put on them. “Tonkokhodnye” blocks were also used and they had thinner cheeks and thinner pulleys of a larger diameter than usual. “Tonkokhodnye” blocks were used where tackle must pass through the block rapidly, or where it was necessary to increase the force without increasing the number of pulleys.
Blocks were distinguished by a quantity of pulleys - single-pulley and three-sheave, and in a quantity of kips. Wooden blocks also had iron binding, used with swivel hooks and clamps. The binding could be external or internal. The main advantages of blocks with the iron binding consisted in their strength and in simplicity of dismantling for the inspection and lubrication. Such blocks were used with the lifts of the lower and the masthead yards, braces and the masthead braces, halyards, and gaff.
The length of a blocks was normally measured in the Imperial inch lengthwise along the cheek. The importance of blocks depended on the thickness of the tackle going through them. In order to select the right block and tackle, the following rule of thumb was applied: the length of the block must handle three thicknesses of tackle, “tolstokhodnogo” block two thicknesses, “tonkokhodnogo” - five thicknesses.

For contemporary modelers, I recommend that you not forget that the thickness of tackle was measured as a lengthwise circle in inches. In the domestic fleet, single-pulley blocks had a length from 4 to 27 inches, “dvushkivnye” from 5 to 26, and three-sheave from 13 to 24. The usual “dvushkivnye” did not exceed 19 inches. “Tolstokhodnye” single-pulleys were made from 6 to 16 inches and were used on mainmasts, sheets and tacks of lower sails, for reef- pulley blocks on lateral topsails, on foresail and lifts on vessels of smaller than the frigate.

Therefore, it is simple to calculate, that, for example, the length of blocks in the angles of the lower sails of the model of the battleship “Azov”, are made on a scale 1:540 and represented as 0.75 mm.

Special machine are often used to make blocks. However, using the method below, blocks can be made in nearly the same time as can be done on special machines. The method of producing four blocks is described below.

The material I use for preparing blocks is that used in the making furniture. Ten years ago I purchased a large bundle of scraps in a craft store. Thin metal can be substituted with a thickness of 0.15 – 0.25 mm. Metal is harder and can be toned down with paint, saturated with glue, or varnished.
Then material is cut from a strip of the prepared material in a width that corresponds to the width of the cheeks of the block being imitated. The corners are cut off from one side and future billet is cut off lengthwise cheek, corners from other side and then are cut off, thus to block is given its form (Fig.2). Once you have the necessary quantity of cheeks, the sit aside and move to the next step. 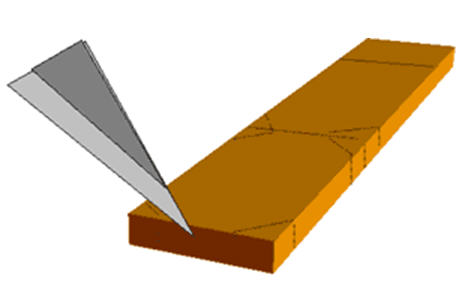 Fig. 2. Cutting the cheeks of blocks from the strip
Next we prepare the thread, to use as the tackle. If you do not have any special thread on hand in a thickness that corresponds to the scale of the model (I have used fishing line, hair, polymeric fiber and other experimental materials), it is possible to prepare some in the following manner. From a coil of thread in the right color, cut off a section in a length of 10-15 cm. The thread is usually wound in two to three strands and you will need to unwind the strands. So that the curled strands become and stay flat they must be heated. Hold the strands tightly slightly above a light bulb. This is the very quick procedure and you must be ready to know when they are ready. If the fibers of the strand begin to melt and stretch or stick, remove it from the heat of the bulb or the strand will break. You may have to experiment with height you hold the strands above the bulb and the temperature of the bulb.
Now to the process of making the block. The shaped piece of wood is positioned with the inside facing up. The tip of the strand is dipped into the glue (I use CA or super glue) and stuck to the wood. At the same time I glue the second strand - thus the tackle, put through into the block, is imitated. If it is to represent the tackle block or brails, then three threads are glued. Then the other piece of carved wood is glued to the top, thus creating block with the tackle passing through it. If the two carved wood pieces do not match up accurately then the ends of finished block can be trimmed with a knife. (Fig.3). 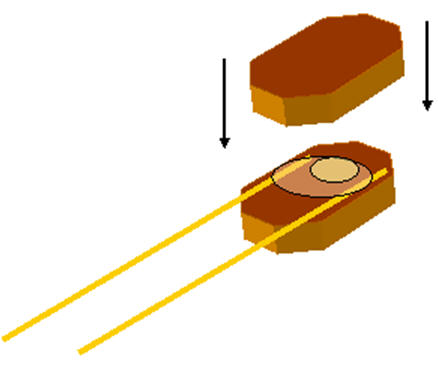 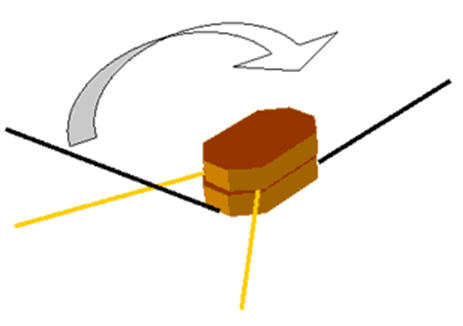 Fig.4. Sling for the block.
The length of sling is determined by where the sling needs to go, such as tied by free ends to the spar, or the sail. So that the sling does not slip off, I coat it and the block with CA glue.
A second method can be used if you prefer.
In the second method, the cheeks of block are not cut from a narrow strip, but they are made with the aid of the special punch. The punch is made from a small hollow metal tube in the diameter of the block you intend to make. The end of the tube is sharpened with a file. This tube is used to punch the block from the wood. The block circles are pushed out of the tube with the aid of a thin wire. As in the first method, glue the strands of tackle to the block and add the top circle. Finally, cut the edges of the block to form the correct shape. (Fig. 5). 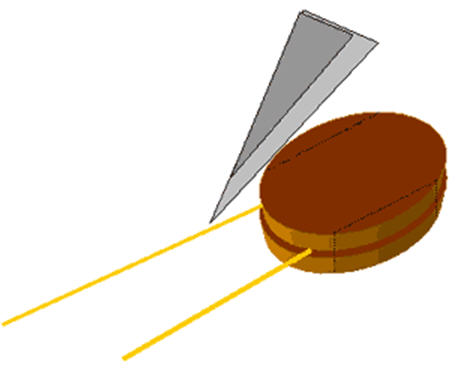 Fig. 5. Production of blocks by the second method.