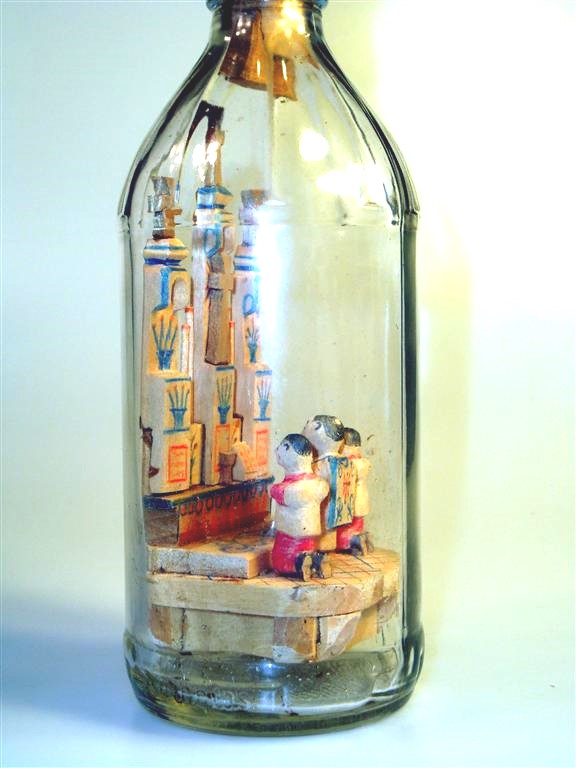 Is there really an “Exeter Artist” who made folk art scenes in bottles? Maybe, or maybe not, but there was an artist building folk art scenes in bottles in the 1930 – 1940’s whose work is identifiable because of the similarities in the way he constructed his bottles. These include the way he built his sectional floors and bases, the way he carved his figures, the use of a pipe, the way he added color, and more. These are all ways to recognize this artist’s work. And because at least one source identified this Artist as being from Exeter, Rhode Island I now fondly refer him as the “Exeter Artist” – at least until his or her true identify comes to light.

The account provided by a previous owner of a bottle containing an Altar Scene with a Catholic Priest standing and two Altar Boys kneeling at the foot of an elaborate altar goes as follows: "It was made by a young man who was fighting polio in the 1940's. The bottle was made in Exeter, Rhode Island in Washington County, in the woods south of Warwick, Washington, or South County, as it is locally known as the resting place of the New England Vampire, Mercy Brown. Religious iconography is very common here, as much a talisman against the dreaded Undead as a celebration of the Church itself."

While that story has not been proven or substantiated, what is known is that the same Artist made a bottle containing six Indians with an American flag. It is listed on page 169 in the book "Genius in a Bottle, The Art and Magic of Bottle Whimseys" by Susan D. Jones. There is another bottle by this Artist at http://www.sdjones.net/FolkArt/bears.html. It is a two story construction with five bears. On the upper level is a bear at a podium and two bears holding rifles. On the lower level, two bears are working a cross-cut saw.

Three other bottles by this artist are shown in the Gallery. They include a two story boxing scene, a man, Indian and teepee scene, and cowboys and horse scene.