These ships in bottles are among the earliest identifiable American examples ones found today. And, over the years there has been much debate as to whether these were built by a single individual, or more than one person. In 2015, a bottle surfaced with a label that identified a man whose first name was partly obscured but believed to be Thomas and a last name clearly seen as "Edwards" and as the "Maker" and the location as the "Soldiers Home Ohio." Thomas Edwards was a resident of the Soldier's Home (at the time, the National Home for Disabled Volunteer Soldiers) in Dayton, Ohio. The label, however, was under the bottle and on the outside. Had the label been inside the bottle there would be little doubt that Thomas Edwards was indeed the artist of these magnificent bottles. However, with the label on the outside it is not 100% reliable.  If in fact Thomas Edwards is the name of the Soldiers Home Artist, the debate still continues if he is in fact the only artist or was one or more living together in Soldier’s Homes learning from each other and making these bottles?

Many variances in the bottles in style, method of construction, rigging, and stoppers exists raising question and suspicion and that there may have been more than one artist. Having said that, artists often develop different styles and methods over time and it is possible that the Soldiers Home Artist was indeed just one artist, perhaps Thomas Edwards. 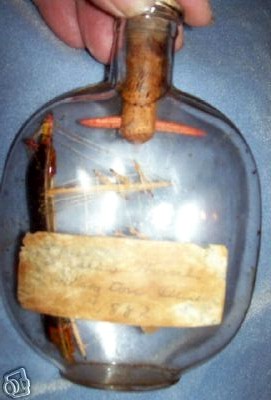 Near the end of the Civil War in 1864, it was estimated that by the close of hostilities there would be over 100,000 men from the Union Army who would be unable to return to civilian employment. On March 3, 1865, President Abraham Lincoln signed into law an act of Congress establishing the National Home for Disabled Volunteer Soldiers to care for these disabled veterans of the Union Army. The Central Branch of the National Home, located approximately 3 miles west of the city of Dayton on 355 acres of farmland, was opened in September 1867. At its inception the Central Branch was the largest branch of the National Soldiers Home system. Records indicate that the largest number of veterans cared for in a year was 7,092 in 1898. The largest number of veterans present was 5,033 in 1897. The number of visitors to the Central Branch swelled to 669,059 in 1910, which is the last year the count of visitors is available.

Early administrators were not content to provide merely living quarters for the disabled veterans. From the outset, officers and administrators sought to provide religious, intellectual and recreational activities for the men in residence. The grounds were initially laid out by Chaplain Thomas B. Van Horne and were maintained by the veteran patients. Lakes surrounded by miles of strolling paths and scenic walks provided a pastoral setting for rehabilitation and relaxation. For more than 80 years, the facility and its lavishly landscaped grounds were a showplace and attracted over 350,000 visitors per year.

The hospital of the Central Branch was the first hospital completed in Montgomery County, dedicated in May of 1870. The Home Hospital was a marvel of innovative and progressive design with interior steam operated elevators, indoor plumbing and steam heat.

Ten years after its founding, by 1877, the facility had been transformed into a city with 132 buildings, many of which had running water, steam heat and gas lighting. There were six and one-half miles of road, two miles of gravel walkway, many wells and four lakes. The facility also boasted a 250 acre farm which provided much of the produce consumed by the patients.

In July 1930, the National Soldiers Home system was dismantled and consolidated into the newly formed Veterans Administration.

Bottles by the Soldiers Home Artist